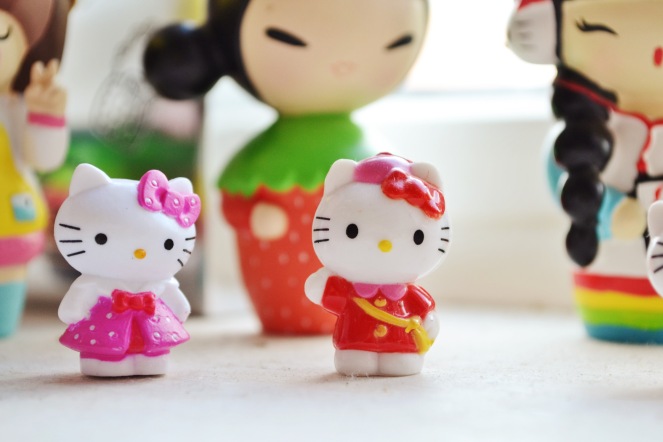 Hello Kitty! Now this is where I admit I’m ahem… 32 and so technically I’m a little too old for this, but I say who cares they make me smile! It’s not just Hello Kitty I love all things Kawaii, which is the Japanese word for all things cute, loveable and adorable, and is a huge part of Japanese culture. If I were to live in Japan liking Hello Kitty would be a normal thing :) A sociology professor from Musashi University in Tokyo has actually said that the word cute is a magic term that encompasses everything that is acceptable and desirable in Japan.  I think we all need a bit more cute in our lives.

Even their stamps are cute!

This is just one of my Momiji dolls I own and the newest, which was given to me on my birthday, its my new favourite! You could call me a collector but I don’t have that many… maybe 7, I do have quite a few other Kokeshi dolls. I was sad to find out that the original meaning behind the Kokeshi dolls were, they were made as a substitute or reminder for a lost child. However when I spoke to my Japanese pen pal about this she did tell me there were actually several meanings behind them, one being that people in North Japan believe children have great power and they thought the Kokeshi doll was a cute souvenir to symbolise this. I like this it’s not so sad :)

My other  collecting is stationary, I love these pretty pop up cards from Paperchase. I recently got into back into penpalling and have been really enjoying sending and receiving the letters and getting to know some really lovely people from around the world.

It does mean of course that I am able to fuel my collecting with replenishing the collection with pretty new cards and letters, stickers, stamps and tapes.

One thought on “Cute on Sunday – what makes me smile..”

The worst 2 weeks of my life. I can't believe my beautiful mama has gone. The woman who is why I am "What Saysie Makes". Saysie was the pet name she gave me when I was a baby, she bought me my first sewing machine and taught me how to use it, and fed my supply of fabrics and notions. She encouraged me and supported me every step of the way. The person I could chat endlessly about sewing and fabrics, who read my blog and would always send a little message about it. A doting Nana to her only grand-daughter, my best friend and the best mummy anyone could ask for. Heaven has gained a super special angel and is super lucky to have you. My heart is in a million broken pieces and I don't know how to handle this pain 😭 My only solace is to know that after an epically long and courageous battle she is no longer in any pain or suffering. The last week of her life I watched as she faded away from me and that's when I truly learnt about heartbreak 💔💔💔 I feel so lost and empty right now 😭 #fuckcancer
Not that I need any excuse to dig out the pinks, but I do love that Valentine's is just around the corner so that makes it extra OK! 😊💗💗 . . . . . #rileyblakedesigns #iloverileyblake #rbdbasics #rbdblossombasics #rbdstripebasics #rbdginghambasics #rbdswissdotbasics #valentines #valentinessewing #sewpink #christopherthompson #thetattooedquilter #aurifil
At the start of last year I started putting all my snips of floss and 12wt thread in a little jar! It always seems a shame to throw them away! I am pleased with my full little jar, although a painful reminder of all the unpicking I had to do on a certain project. Unfortunately I think the majority of what was on that 12wt red reel is now in the jar! 😫 I also keep the empty spools of cotton I used. These are all what I finished last year! After the third @aurifilthread 50wt White I thought I’d be better off buying a cone! . . . . . . #aurifloss #aurifil #aurifilthread #threadmatters #snips #riflepaperco #threadscraps #stitchersofinstagram #stitchersgonnastitch #aurifil12wt #makersgonnamake
Finally the extras I included in my #birthdaystitchersswap2019 parcel! I had a lot of fun making this parcel for Gwawr @patchwork_and_me and have really appreciated all your kind comments on these gifts, thank you! I decided at the end of last year to take a break from swaps this year, so please remind me if you see me sign up!! 🤣🤣 . . . . . . #foundationpaperpiecing #libertyfabrics #libertyandlinen #winifredrosefabric #mugrug, #pouch #pouchaddict #swapextras #embroidery #patchwork #maker #iamamaker #handmadegift #lovequiltingmag #makersgonnamake #makersofinstagram
Another thing I made for my #birthdaystitchersswap2019 partner was this #sewingdatetraveler which is a free pattern on the @robertkaufmanprojects website. I was so happy with how perfectly the @sarahjanestudios Unicorns were just the right size for the pockets! It was also a perfect opportunity to use this rainbow striped webbing that I bought from @sewhotuk. . . . . . . . #sarahjanefabric #sewingbasket #sewingcaddy #essexlinen #robertkaufman #sewinggift #sewcute #unicornfabric #sewhot #makersgonnamake #makersofinstagram #sewersgonnasew #bagmaker #bagmaking #bagmakersofinstagram
I keep meaning to share what I made for @patchwork_and_me #birthdaystitchersswap2019. One of the things I made was this medium sized flora supply case, and I just had to make a clamshell version! I was a little nervous as it was only the second one I had made and the first as a gift but I got there in the end! 😊 . . . . . . #florasupplycase #cloverandvioletpatterns #epp #englishpaperpiecing #clamshells #handquilting #aurifil #aurifilthread #sewfun #eppaddict #atsukomatsuyama #kawaii #makinggifts #makersgonnamake #makersofinstagram