When my lovely friend told me last year that she was expecting their 2nd baby in June I knew right away I wanted to make them a baby quilt.

We’ve been friends for about 10 years ago, I first met her in a very difficult time of my life and she was there for me like no one else ever has been. Unfortunately (for me) a few months after we became good friends her husband got a new job which would mean they had to relocate to a different part of the country. Despite this and despite not being able to see each other often we are still very good friends. I wanted to do something that would show my appreciation of our friendship and quite simply she deserved it!

They decided they were going to find out the gender of the baby which helped me decide in which direction (and colours!) to make the quilt. I waited patiently to find out while not really being able to decide on a design. Finding out they were team blue was very exciting although blue is not a colour I am used to working with!

Originally I had seen a triangle design that I quite liked but then I came across the Bjorn Bear pattern by Elizabeth Hartman and I knew that it would be perfect!

This is a great pattern but I’ll be honest it did take me a little longer than I anticipated!! I made a good start but then gradually it got left to one side. Her due date was the 25th of June so naively I thought I had lots of time! Of course babies have habit of not arriving on their due date and this little man decided to come a bit earlier!

When she got in touch with me to say she’d had him but he was very poorly and in the intensive care unit of a different hospital my heart just broke for her! I cannot even imagine the pain and the worry she was going through! I didn’t sleep at all well that night, thinking of her little family and woke up very early with a renewed determination to get the quilt finished. I may not be able to be there for them physically but hopefully this handmade gift would show that I was there in spirit and thinking of them.

I had originally planned to do them in all shades of blue, and the original pattern was for 12 bears but as the time was now a real issue I decided to do 9 bears and make the sashing a little wider to compensate for the missing 3 blocks. As I was laying out the bears I had already finished I thought it would be perfect to have a single yellow bear in the middle. It reminded of me a sunshine shining bright.

I can’t tell you the immense joy and pride I had when I’d finished it! My only problem was deciding on how to quilt it! The pattern and a quick scroll online showed me that people had either done a free motion style quilting or straight lines some going horizontal others vertical and others had done squares. I thought I would also go for straight lines my only problem was finding a thread to match! So many different contrasting colours that even a slightly wonky line would be incredibly obvious! I just wasn’t happy with it at all! I was ready to abandon it throw in the quilt “naughty” cupboard (remember the Unicorn quilt!?) and make something new from scratch.

After sleeping on it I knew I couldn’t just let all my hard work go to waste so I unpicked all my *very* wonky lines and decided to quilt around the bears with matching colours! Luckily I have a good stash of Aurifil colours and was easily able to match them up.

It took about a week going full on at it, (I think I may be the worlds slowest quilter!!) but it was totally worth it and I was very pleased with the result! I was glad I went against the norm and did something that suited me and my style.

I like how the bears show on the back too.

The next decision was the quilt label. It’s not something I’ve ever actually put on a quilt before and it’s something I want to try and get in the habit of doing!

I wrote the above on some Essex linen with an air erasable fabric marker and embroidered it. I don’t have the prettiest of handwriting and I am feeling a little cringey about it but it makes it personal! Plus I haven’t worked out how to do it on my machine yet! :D I used some of the leftover binding to frame it and appliqued it onto the back.

It was finished! Not the impatient task of waiting to see them to gift it to them. After talking with my husband we said we couldn’t wait till then and so it got wrapped up and into the post. I would have love to have seen her face when she opened the box! 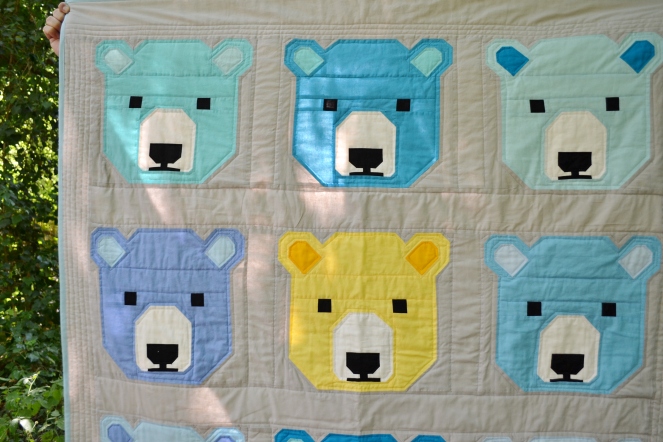 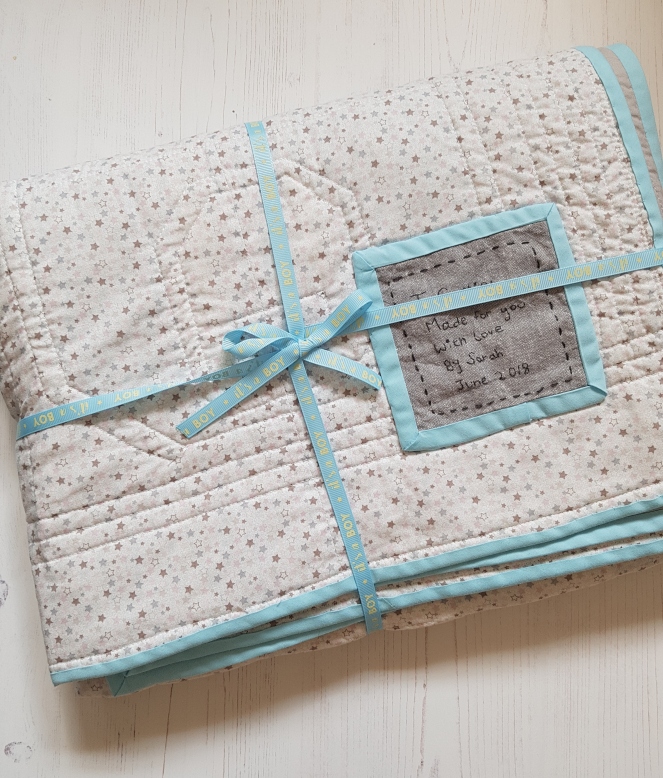 I was a little nervous sending it through the mail, even tracked items get lost but luckily it got to her ok and she sent me the most heart exploding picture! 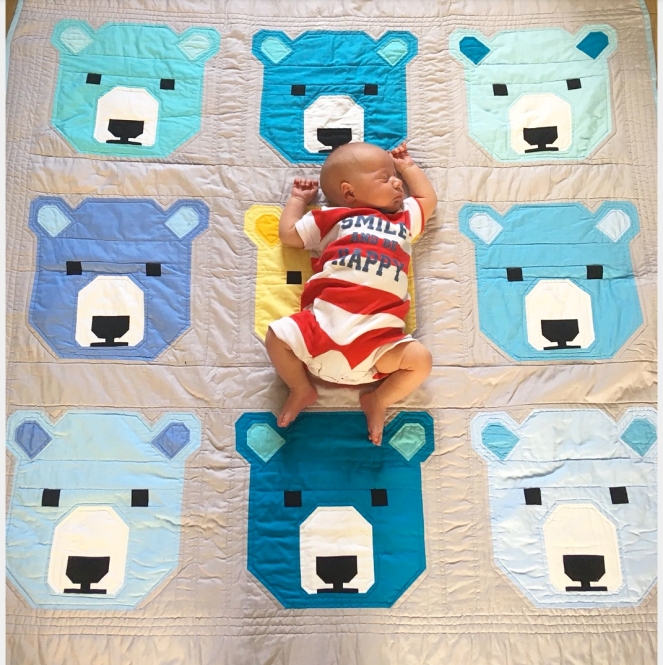 Everyone meet baby Castiel the strongest little bear ever! I was worried with the missing 3 blocks the quilt would be too small but turns out it’s massive and he’s so tiny!

A lot of people don’t understand quilters, even fellow people who sew think it’s a mystery why you would get a load of fabric cut it all up and sew back together again (all the technically you could say that about all types of sewing!) but THIS is WHY I do! Pictures like this make me want to make a million quilts and wrap everybody I love in quilty love. Although maybe not right now as it is 30°C out there!

2 thoughts on “If you go down to the woods today…”